A watershed is the area of land where all of the water that falls in it and drains off of it goes to a common outlet. Watersheds can be as small as a footprint or large enough to encompass all the land that drains water into rivers that drain into Chesapeake Bay, where it enters the Atlantic Ocean. This map shows one set of watershed boundaries in the continental United States; these are known as National 8-digit hydrologic units (watersheds). 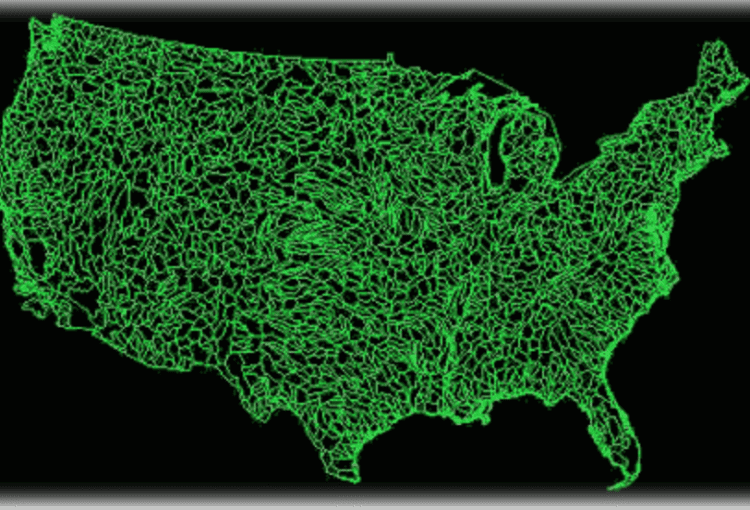 A watershed is an entire river system—an area drained by a river and its tributaries. It is sometimes called a drainage basin.

Watersheds can cover wide areas. Runoff water from a large watershed in the midcontinental United States drains into the Gulf of Mexico through the Mississippi River system. The Amazon River watershed is huge, draining over a third of the entire South American continent.

Most freshwater in the world flows through watersheds that eventually drain into the ocean. However, sometimes a watershed will not drain into the ocean, but into an internal body of water. Water can only leave these bodies of water, called endorheic basins, by evaporating or seeping through the soil. The Aral Sea, bordering Uzbekistan and Kazakhstan, drains one such endorheic basin in Central Asia.

Some watersheds are sharply defined by the crest of a high ridge, or by a continental divide. When used in this sense, the term “watershed” does not refer to the drainage basin of one river system, but rather to the divide between two or more drainage basins. Precipitation that falls on opposite sides of this type of watershed flows in different directions. Watersheds in low or gently rolling areas may be poorly defined, but can be identified by the flow of the rivers.

What Is A Watershed?

A watershed can cover a small or large land area. In the St. Louis vicinity, for instance, the Meramec River is a small river draining a relatively small amount of land. Small watersheds are usually part of larger watersheds. The Meramec River watershed, which is supplied by even smaller watersheds from dozens of streams, drains into the Mississippi River. All the streams flowing into small rivers, larger rivers, and eventually into the ocean, form an interconnecting network of waterways.

These two processes, surface runoff and infiltration are important for a number of reasons.

For one, they affect water quality. Think about it… The water that runs off the surface of the Earth picks up water pollution and deposits the pollution in streams and rivers as it drains the watershed. Along with many different types of pollution that are carried by surface runoff, soil also becomes a water pollutant as it is eroded from farm lands. Water that filters through the soil can also become contaminated with pollution that is left over from agricultural, industrial, commercial, and other types of human activity.

The network of streams and rivers that drain our watershed and carry water pollution ultimately empty into larger bodies of water, such as lakes and oceans. As the larger rivers carrying water pollution from the land flow into lakes and oceans, all of the pollution that was in the rivers now is concentrated into these other bodies of water. The oceans of the world become the final resting place for tons of pollution. Through our watersheds, pollution is distributed far away from its original source. And obviously, polluted water affects water quality.

What is a watershed?

A watershed is an area of land that captures rainfall and other precipitation and funnels it to a lake or stream or wetland.

Water, a renewable resource, is continually recycled and returned to the ecosystem through the hydrologic cycle. Moisture is carried into the Great Lakes basin and as weather systems move through, they deposit moisture in the form of rain, snow, hail or sleet. Water enters the system as either precipitation directly on the lake surface, runoff from the surrounding land, groundwater, or inflow from upstream lakes. Precipitation falling on the land infiltrates into the ground through percolation to replenish the groundwater. When water accumulates below ground in the spaces between soil and rock, it is called groundwater.

Water leaves the system through evaporation from the land and water surface or through transpiration, a process where moisture is released from plants into the atmosphere. Water also leaves the system through groundwater outflow, consumptive uses (drinking water, industrial/agricultural uses, etc.), diversions, and outflows to downstream lakes or rivers. Ultimately, water flows out of each of the Great Lakes through their connecting channels and the St. Lawrence River to the Atlantic Ocean.

Please provide your email to be added to our list, & receive info on OEI events, jobs, volunteering, collaborations, news and more.

(Your info will not be shared with others.)